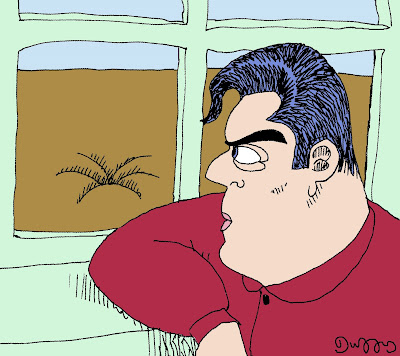 Wilhelm was an intense, certified genius who wrote a scathing column on modern culture for the Mensa Times-Picayune. He saw the world as one big asshole, so he never left the sanctuary of his little bungalow, surrounded by his his goldfish, his Fresca and his collection of rare erotica.

What Wilhelm didn't know was that the "asshole" outside his south window was actually just a hole in the ground, and that the north side of his bungalow faced a communal swimming pool shared by five other bungalows. His neighbors were all busty, Teutonic flight attendants with Lufthansa.

I guess "genius" is a relative term.

Wilhelm considered those days at New Orleans Natural Gas behind him. Sometimes he would venture out to a local pub-- the Colonial-- and practice forging Kurt Vonnegut's signature on the cocktail napkin pulled from beneath his salty-rimmed drink. His thoughts of revenge and voyeurism were interrupted by a jukebox that only played accordian solos.

"Mensa" is the Swedish verb for when a woman gets her period. Genius. Ha.